The New Covenant Law was established for the True Israel of Yahweh. The fulfillment of the Old Covenant was the promised Messiah and His shed blood. Understanding and following the New Covenant Law is imperative if we are to inherit everlasting life.

John 6:27 Labor not for the meat which perishes, but for that meat which endures unto everlasting life, which the Son of man shall give unto you: indeed the same that are set apart unto Yahweh the Father are sealed.

The earnest (which is a down payment) of our inheritance with Messiah, is that we are sealed with His Holy Spirit of promise. The fulfillment of this contract is our redemption which is realized when Messiah returns with our Salvation (Eph 1:13-14, Heb 9:28, 1 Peter 1:5).

And then shall the Son of man appear, and when these things begin to come to pass, then look up, and lift up your heads; for your redemption is near (Luke 21:27-28).

The passages below elaborate on the New Covenant Law, but also contain a strong warning to all who insist on self-righteousness through dead works – which is the attempt to hold on to the Old Law that has vanished. 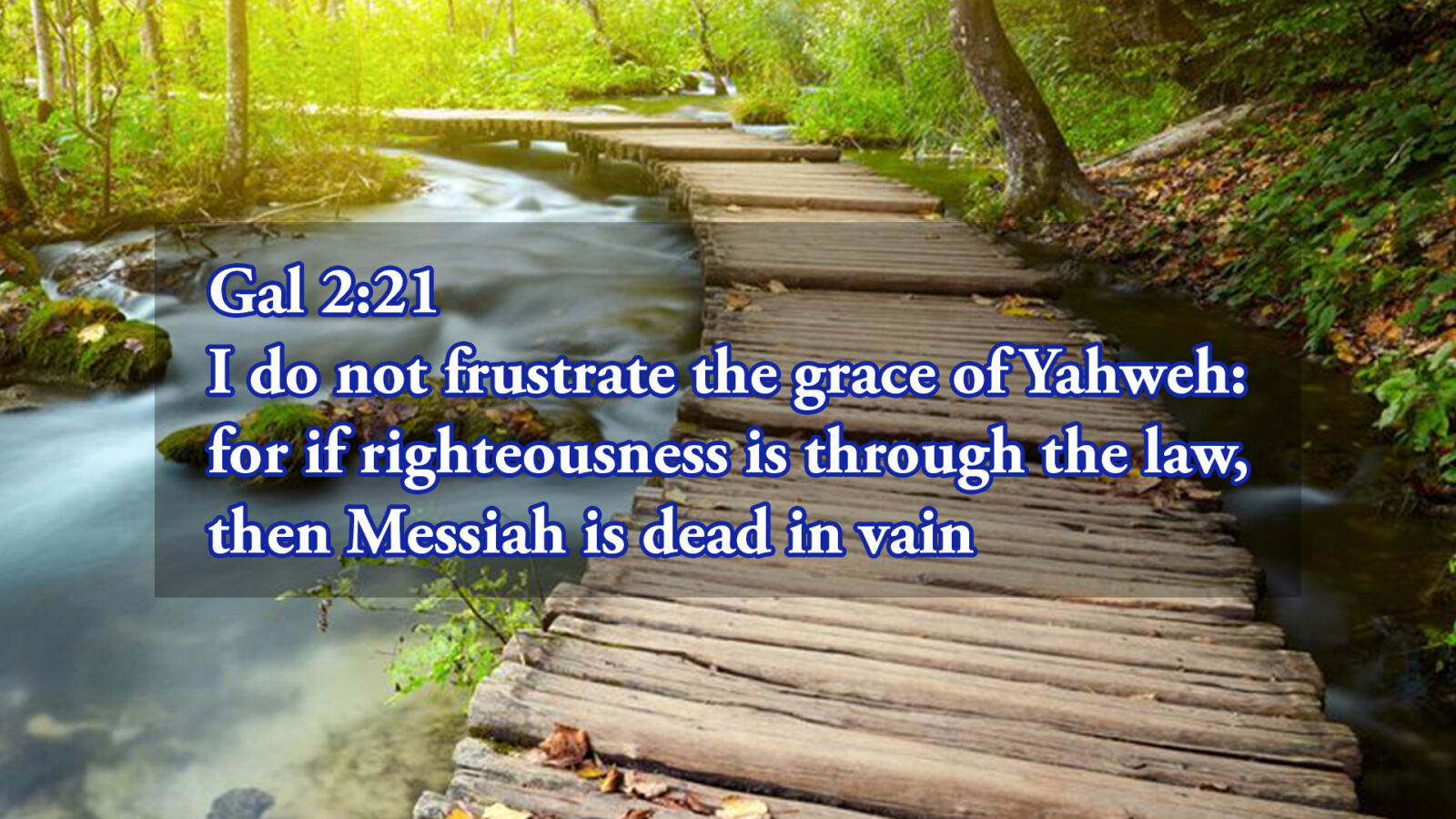 Few are able to comprehend the significance of what Messiah the Savior revealed when He declared, I am not come to destroy the law but to fulfill it. Most, unfortunately, will focus on the words I have not come to destroy, as a poor excuse to suggest that the Old Testament laws are still applicable. What they miss due to a carnal knowledge that produces spiritual blindness, is that the fulfilling of the Old Law made it obsolete. When the first is designed to be replaced by the second, this second contract represents the fulfillment of the first one, not the destruction thereof.

This same group will blindly ignore the essential portion of this passage which is the reason for our Saviors first advent.

Messiah, after that He had accomplished all things as promised, said “It Is Finished” He took away the curse of the Old Law from His true followers, but that same curse would destroy all those who claimed righteousness through the Old Law (Gal 3:21, Phil 3:9, Titus 3:5).

Heb 8:13 In that he saith, A new covenant, he hath made the first old. Now that which decayed and waxed old is ready to vanish away.

It is necessary to understand that the promise of the Old Law, given through the prophets, was fulfilled with our Risen Savior. His New Commandments are, also the entire New Law. Nothing from the original Hebraic laws, ordinances or commandments would carry forward, except for the promise and curse. There are only two Commandments given under the New Covenant (John 13:34, 15:12, Rom 13:9, 1 Tim 1:5, Heb 7:16, 1 John 4:21, Mat

The end result for all who have placed their faith in Messiah the Savior is the Salvation of their souls (1 Peter 1:9).

The Conspiracy against our Messiah must be revealed  and understood, in order for Messiah to be Savior, He must also be Yahweh, manifest in the flesh.

Did our Savior, not come forth to save His people from their sins (Matt 1:21).

Speaking of conspiracies, how many frauds at the pulpit, teach that Messiah the Savior, sits at the right hand of Yahweh.

Luke 24:44 And he said unto them, These are the words which I spake to you, while I was yet with you, that all things must be fulfilled, which were written in the law of Moses, and in the prophets, and in the psalms, concerning me.

Messiah did not destroy the Law, rather He fulfilled the promise of the Law. Those who put their trust in Him, are justified from all things which could not be accomplished through the Law received by Moses (Acts 13:39). From Mathew chapter five, continuing on until the end of chapter seven, we see the establishment of the New Covenant Law, written in hearts and minds instead of stone (Mat 5:44, 6:19-21, 7:12).

Mat 7:15 Beware of false prophets, which come to you in sheep’s clothing, but inwardly they are ravening wolves.

The New Covenant Law is Eternal

Without the New Law of Messiah, none would escape the bondage of the Old Law, even the condemnation of sin unto death (Rom 8:2-11).

2 Cor 5:17 Therefore if any man be in Messiah, he is a new creature: old things are passed away; behold, all things are become new.

Our Savior’s New Covenant would not be the same as the covenant that He made with those who He led out of the land of Egypt. The scriptures (Heb 8:6-13) completely destroy the ungodly teaching of a triune Godhead.

Heb 8:9 Not according to the covenant that I made with their fathers in the day when I took them by the hand to lead them out of the land of Egypt; because they continued not in my covenant, and I regarded them not, saith Yahweh

But after the arrival of the promised Messiah, we are no longer under the Old Law but have in fact been redeemed from the curse therein through Him. All who are in Messiah are Abraham’s seed, and heirs according to the promise (Gal 3:10-14, 21-29).

Matt 7:26 And every one that heareth these sayings of mine, and doeth them not, shall be likened unto a foolish man, which built his house upon the sand:

Those who set about to establish their own righteousness through the works of the Law, have not submitted themselves unto the righteousness of Yahweh. Messiah, the Savior, has become of no effect unto those who claim to be justified by the Old Law, as they are fallen from grace (Gal 5:4, Rom 10:3-4).

Luke 24:44 And he said unto them, These are the words which I spake unto you, while I was yet with you, that all things must be fulfilled, which were written in the law of Moses, and in the prophets, and in the psalms, concerning me.

The New Law foretold in the Old Testament

Jer 31:33 But this shall be the covenant that I will make with the house of Israel; After those days, saith Yahweh, I will put my law in their inward parts, and write it in their hearts; and I Am to them Yahweh, and they shall be my people.

Isaiah 53:5 But he was wounded for our transgressions, he was bruised for our iniquities: the chastisement of our peace was upon him, and with his stripes we are healed.

Rom 3:21 But now the righteousness of Yahweh without the law is manifested, being witnessed by the law and the prophets;

So go ahead and boast in your law of dead works, we who are of the Faith will boast in the New Covenant Law of our Messiah.

Rom 3:27 Where is boasting then? It is excluded. By what law? of works? Nay: but by the law of faith.

Rom 3:31 Do we then make void the law through faith? Yahweh forbid: yea, we establish the law.

We establish the New Covenant Law of our Messiah through our faith in Him.

Rom 3:28 Therefore we conclude that a man is justified by faith without the deeds of the law. 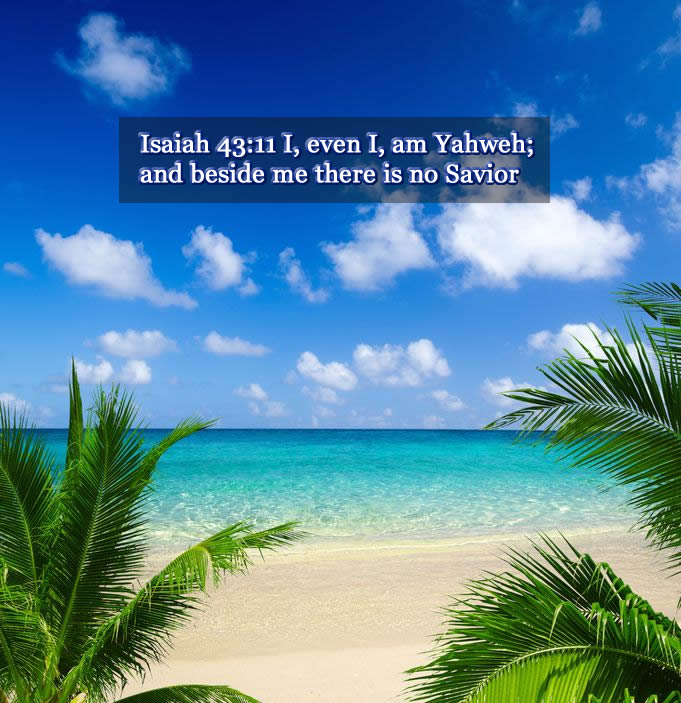 We are not to mix the Old Testament Law, that did not have the power to set us free, with the New Law of Messiah that does. The first is taken away in order that the second be established.

We are not justified by the works of the Old Law, but by the New Covenant Law unto Salvation and Eternal life.

Rom 4:13 For the promise, that he should be the heir of the world, was not to Abraham, or to his seed, through the law, but through the righteousness of faith.

Through faith in Messiah, we can be declared righteous. But to attempt to follow laws and ordinances that have been replaced – this is self righteousness.

Heb 10:11 And every priest standeth daily ministering and offering oftentimes the same sacrifices, which can never take away sins:

When there is forgiveness of sins there is no longer the need for an offering for sin. Our Messiah was manifest, not to provide a covering for sins, but to take them away (1 John 3:5).

The promise is of no effect to those who claim to be justified by the Old  Covenant Law.

Rom 4:14 For if they which are of the law be heirs, faith is made void, and the promise made of none effect:

We can remain in bondage unto the Old Law of sin unto death, or we can have life abundantly through our Savior and Messiah who is Yahweh (Rom 6:11-23).

Rom 8:4 That the righteousness of the law might be fulfilled in us, who walk not after the flesh, but after the Spirit.

Holy Scripture foretold that Abraham would be a father of many nations, and that the blessing promised to him might come upon all nations through Messiah the Savior, that they might receive the promise of the Spirit through a like faith (Gen 17:1-4, Gal 3:8-14).

Rom 9:6 Not as though the word of Yahweh hath taken none effect. For they are not all Israel, which are of Israel: