When Mystery Babylon is Revealed the Great Whore will be destroyed, and Yahweh’s Elect will be persecuted for three and a half years.

Dan 7:7 After this I saw in the night visions, and behold a fourth beast, dreadful and terrible, and strong exceedingly; and it had great iron teeth: it devoured and brake in pieces, and stamped the residue with the feet of it: and it was diverse from all the beasts that were before it; and it had ten horns.

This fourth Beast is also the final kingdom on earth before the return of Yahshua (the Savior).

Dan 7:23 Thus he said, The fourth beast shall be the fourth kingdom upon earth, which shall be diverse from all kingdoms, and shall devour (or make accusations against) the whole earth, and shall tread it down, and break it in pieces.

This last and short-lived kingdom will definitely change the daily events for everyone.

At the end of this Great Tribulation, Yahshua (the Savior) returns, and thus fulfills the prophecy hidden to most in our prayer guide unto Yahweh. Thy Kingdom come thy will be done, on earth as it is in Heaven (Math 6:10).

Dan 7:13-14 I saw in the night visions, and, behold, the Son of man came with the clouds of heaven, and came to the Ancient of days, and they brought him near before him. And there was given him dominion, and glory, and a kingdom, that all people, nations, and languages, should serve him: his dominion is an everlasting dominion, which shall not pass away, and his kingdom that which shall not be destroyed.

Mystery Babylon is Revealed – the beast and false prophet

This demonically inspired Beast will change the laws of Yahweh, and will demand to be worshiped as god. Also, note the period of time given unto the beast, it is three and one-half years, which represents the time of the Great Tribulation.

When Mystery Babylon is revealed, the great whore system is exposed and taken out of the way. Christianity will also suffer tremendously, at the hands of the fourth Beast system.

The Great Whore has a desire for absolute world domination, but it will not come to fruition. Her great reign of terror will soon come to an abrupt and violent end.

Very soon, Satan will declare himself to be the god of this world, and through the Beast and false prophet, demand to be worshiped as such.

Only seven kings fully reign with the Beast for the entire three and one-half years of his kingdom, at which time the covenant of Messiah will again be confirmed with many (Dan 9:27, Rev 13:15).

When Mystery Babylon is revealed, the Beast will make war with the Saints and overcome them. He will have power over all tribes, tongues and nations (Rev 13:7-8). The only ones he will not have power over, are those who are born-again through the Holy Spirit.

The fact that there are saints alive during this time known as the Great Tribulation, proves that the Rapture or  Gathering of the Saints has not yet transpired.

Rev 13:7 And it was given unto him to make war with the saints, and to overcome them: and power was given him over all tribes, and tongues, and nations.

The Beast does not truly have power over all peoples. The all, that he does have control over, represents all of a certain type. Those that worship the Beast, are the ones not sealed by Yahweh.

The introduction above is but a portion of the Mystery Babylon Great Whore series that is now for members only (available at christiantruthproject.com) for the link click here.

If you have been blessed with the preaching at destined to be revealed, it is time to take that next step. Become a member today and you will receive a backstage password enabling you to access these and other groundbreaking articles.

False Christianity and all other religions, feebly attempt through various works to obtain righteousness. This is a feat that is impossible on our own. Through Yahshua (the Savior) who is the image of Yahweh, we are made righteous, and it is His truth that sets us free (John 8:32; Rom 5:21; 1 Peter 2:24).

1 Cor 3:16 Know ye not that ye are the temple of Yahweh and that the Spirit of Yahweh dwells in you

We can allow the spirit of Yahweh’s truth to take up residence within us, and come out of darkness (John 12:46).

Or we can be deceived into thinking that the spirit within us is light when in actuality it is darkness (John 1:5; Luke 11:35).

2 Cor 11:3-4 But I fear, lest by any means, as the serpent beguiled Eve through his subtilty, so your minds should be corrupted from the simplicity that is in Messiah. For if he that cometh preacheth another Yahshua (Savior), whom we have not preached, or if ye receive another spirit, which ye have not received, or another gospel, which ye have not accepted, ye might well bear with him.

Many religious people believe they are obeying their God, but are in fact just obeying the spirit of the god of this world. Mystery Babylon is revealed to be that wicked spiritual system (Eph 2:2; 5:1-11; Col 3:1-14).

As a result of loving the pleasures of this world more than Yahweh, these create a god for themselves based on whatever their evil desires are.

The false Teachers within the church do present many strange doctrines. 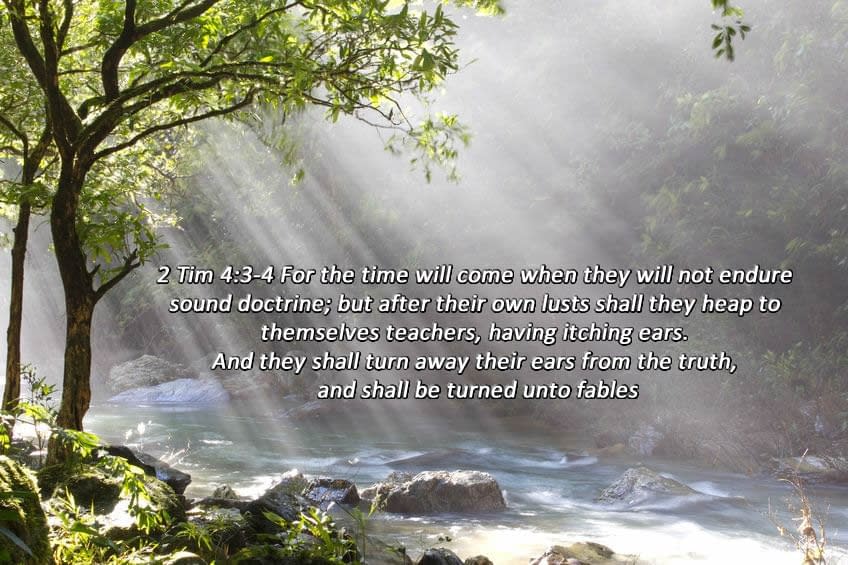 Many in the Christian faith claim to know God, but they do not have a personal relationship with the Creator of all Things.

The Conspiracy against Christ includes a false doctrine of the trinity  that multitudes blindly follow. The great deception within Christianity has taken place even before Mystery Babylon is revealed. How many who have obeyed these wolves masquerading as God’s servants, will also fall prey to the one who will rule the fourth World Kingdom with lying signs and wonders?

Because of the false teachers in the Church, most mainstream Christians that pray to the Father in the name of Jesus, are blissfully unaware that the name of Jesus is actually Yahshua (the Savior).  He is actually the image of Yahweh manifest in the flesh (1 Tim 3:16).

When these end times revelations are revealed, the true servants of Yahweh will be persecuted and slaughtered like sheep. Will those who are simply involved in the Christian cult of self-righteousness, escape the darkness and finally embrace the true light?

No man will be able to buy or sell without pledging allegiance to the Beast, during the 3 1/2 year tribulation event. So when the rapture hoax is exposed as yet another Christian fairytale, only the ones that are actually born-again will be able to faithfully endure.

When Mystery Babylon is revealed, those who are without the Spirit of Yahweh will fall by the wayside. Faith without works is dead, and a Saving faith is only possible if one has been Sealed with the Holy Spirit unto the day of Redemption (John 14:17-18, Rom 8:2-14, 2 Cor 6:16, Mat 13:19).