Yahshua (the Savior) is the Messiah that came forth from the Father, and He declared that no one comes to the Father except through Him. The revelation of the Father is through the Son, who is the image of the Father (John 14:6-7, Isa 9:6).

For unto you is born this day in the city of David the Savior, who is the Messiah from Yahweh (Luke 2:11).

Click on the following two highlighted links, to read the study guides that will explain why the title of and the false name of are not used.

Exo 20:7 Thou shalt not take the name of Yahweh thy God in vain; for Yahweh will not hold him guiltless that taketh his name in vain

The word vain means emptiness of speech, or a lie. And that is exactly what they accomplished – by replacing the Glorious name of Yahweh with an empty meaningless title. 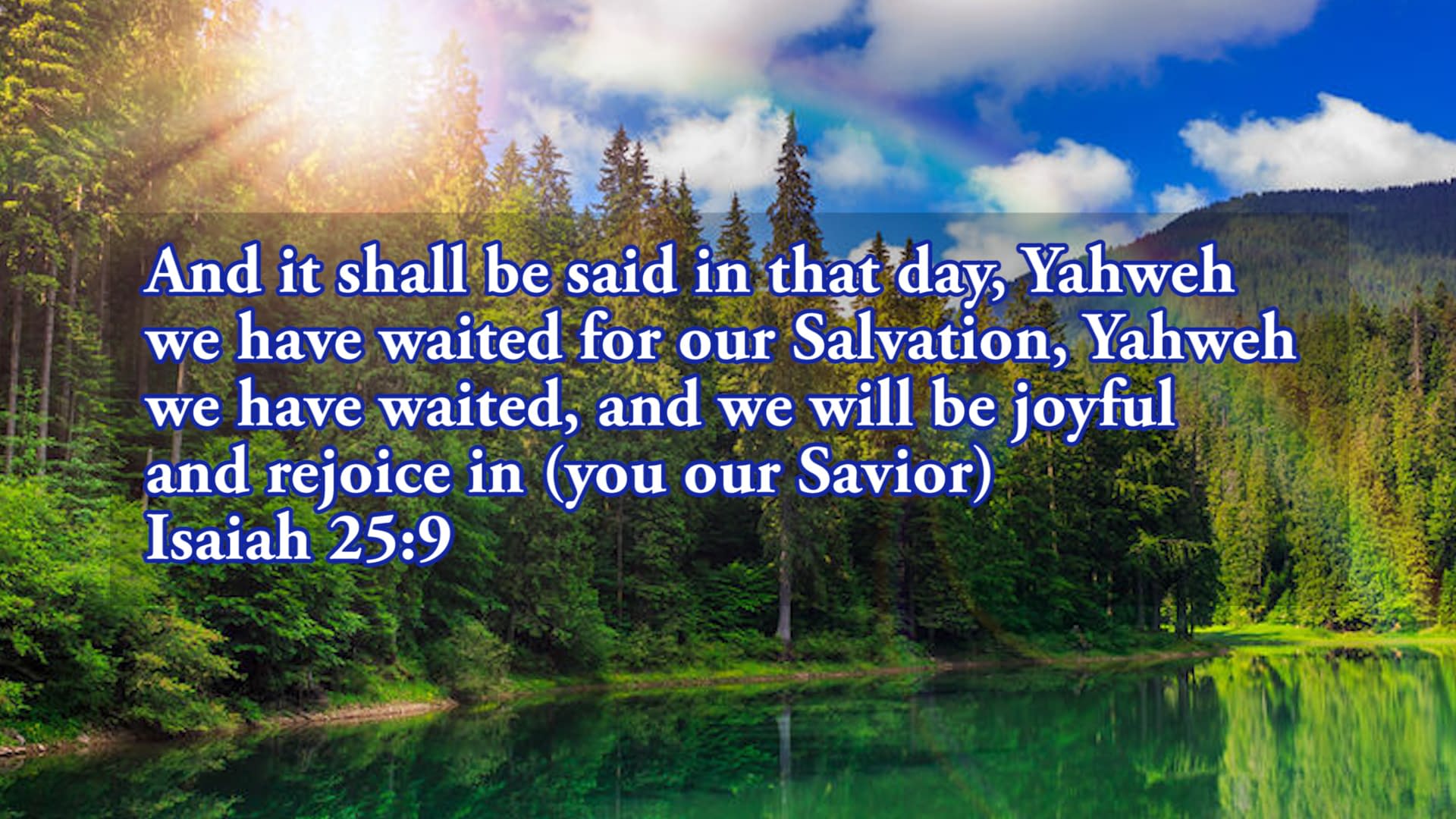 Yahshua (the Savior) is Yahweh manifest in the flesh. We do not participate in using the false name of .

The name has no meaning at all, and the title of Savior is only given unto Yahweh Himself (Joel 2:32).

Isaiah 45:21 Tell ye, and bring them near; yea, let them take counsel together: who hath declared this from ancient time? who hath told it from that time? have not I Yahweh? and there is no God else beside me; the righteous Yahweh thy Savior; there is none beside me

Stop and consider why Stephen was put to death. Firstly, he accused the Judaizers (or those who were of the false tribe of Judah) in front of the high priest, of being guilty of slaying the prophets and the promised Messiah (Acts 7:52).

Afterwards, he said “behold, I see the heavens opened, and the Son of man dwelling as the right hand of Yahweh” (Act 7:56). And these devils stoned him for uttering the name of Yahweh, and testifying that the Savior was indeed Yahweh.

Next, we must also realize why the Savior was put to death. He said “Hereafter shall the Son of man dwell as the right hand and power of Yahweh” (Luke 22:69). And they then asked if he was the son of God, because according to their perverted religion it was blasphemy even to utter the name Yahweh (Lev 24:16).

His reply was “you rightly say because I AM”. The phrase I AM, carries with it a very powerful statement referring to the fact that He preexisted in the Spirit, before His physical appearance in the flesh. We read in John 8:58, where they also wanted to stone Him for saying before Abraham was, I am.

Rev 1:8  I am Alpha and Omega, the beginning and the ending, saith Yahweh, which is, and which was, and which is to come, the Almighty

In Psalms 68:19, the title God H 410, and Lord H136, should actually be replaced with H3068 יְהֹוָה YHWH which is transliterated into English as Yahweh.

Strong’s transliterates H 3444 יְשׁוּעָה as yeshuwah, which means Savior. The False title of must be replaced with His true title, as He is the Savior. The title Yahshua, is utilized at destined to be revealed only because that is the sound that would come forth when transliterating H-3444 into English.

The words God and Lord are falsely inserted in scriptures to replace the mighty name of Yahweh. This is another example of the lying pen of the scribes.

Isa 9:6 For unto us a child is born, unto us a son is given: and the government shall be upon his shoulder: and his name shall be called Wonderful, Counsellor, the mighty Yahweh, the everlasting Father, the Prince of Peace

Matt 1:23 Behold, a virgin shall be with child, and shall bring forth a son, and they shall call his name Immanuel, which being interpreted is, Yahweh with us

The only way Messiah can be called the Savior, is if He is the manifestation in the flesh, of the Spirit of Yahweh (1 Tim 3:16).

But if I with the finger of Yahweh, cast out devils, truly the kingdom of Yahweh is come upon you (Luke 11:20).

Act 4:12 Neither is there salvation in any other: for there is none other name under heaven given among men, whereby we must be saved

The question is what is the name of the Savior of the world, than can deliver us from this present evil world?

Isa 7:14 Therefore Yahweh himself shall give you a sign; Behold, a virgin shall conceive, and bear a son, and shall call his name Immanuel

The meaning given in Strong’s for Immanuel, is God with us. However God is a title, so a proper interpretation would be Yahweh is with us.

In the following two verses from Joel, and Acts, the false name of Lord has been replaced with the true name Yahweh.

Joel 2:31 The sun shall be turned into darkness, and the moon into blood, before the great and the terrible day of Yahweh comes to pass

The name of the Savior is clearly identified in the Old Testament scriptures, and His name is Yahweh. The problem is that Strong’s H 3068, which corresponds to יְהֹוָה or YHWH, incorrectly transliterates this name as Yehovah. And then a criminal act transpires, that is also blasphemous, wherein the Glorious name of Yahweh is translated into a simple title such as Lord, or God. A name can not be transliterated into a title, and there is no letter J in the Hebrew or Greek alphabets. Therefore, Jehovah is another false name.

Joel 2:32 And it shall come to pass, that whosoever shall call on the name of Yahweh shall be delivered…

In the New Testament scriptures, the crime is even worse. Strong’s G 2962 κύριος, is transliterated as kyrios, and the etymology or root word is from kuros which has a meaning of supremacy. Then this Greek word is translated as Lord, (with a big L), lord (with a little l), master and sir. This fictitious title, Lord, is not taken from the true root word יְהֹוָה or YHWH, and as such it is not a transliteration or a translation – it is yet another Judaic lie.

So once again an abomination takes place. Yahweh’s name is removed with purposeful intent, and the creator is given a title of Lord instead. He also shares this title with mortal men. The lying pen of the scribes will pay a deadly price for their abominable crimes.

Acts 2:20-21 The sun shall be turned into darkness, and the moon into blood, before that great and notable day Yahweh comes. And it shall come to pass, that whosoever shall call on the name of Yahweh shall be saved

Is it not true that the Salvation of mankind is realized through Yahshua (the Savior) and Messiah, who is the very image of Yahweh?

The god of this world (known also as Satan) by means of many false preachers has indeed blinded the minds of those that do not believe this essential reality (2 Cor 4:4).

One of the proof texts related to this claim is found when the trinity mistranslation of 1 John 2:22 is uncovered or revealed. The word and is used in this passage (any many others) to separate the Father and the Son. When the correct word also is inserted (G 2532 which is used as a connector) it becomes rather evident that the Father is indeed the Son.

Yahshua (the Savior) when speaking to Philip, said “he that hath seen me hath seen the Father; so then how then do you say show us the Father”?

John 16:28 I came forth from the Father, and am come into the world: again, I leave the world, and go to the Father

The disciples finally understood the mystery that apparently few professing Christians are able to grasp. They believed that Yahshua (the Savior) came forth from Yahweh (John 16:30).

Those of the false tribe of Judah wanted to slay the promised Messiah, who said unto them, truly, truly, I say unto you, Before Abraham was, I Am (John 8:58).

And without controversy great is the mystery of Yahweh, Yahweh was manifest in the flesh (1 Tim 3:16).

Yahweh declared to Isaac “I AM Yahweh of Abraham thy father (Gen 26:24). Yahshua (the Savior) who is the image of Yahweh said Before Abraham was, I Am.

The Judeans sought to kill the promised Savior because He declared Himself to be the same as, or equal to Yahweh. Yahshua (the Savior) who existed before Abraham, was also Abraham’s Messiah (John 5:18, Phil 2:6).

The scriptures clearly teaches that there is only one Savior. Yahweh is the only Savior according to many Old Testament scriptures. And yet Messiah is clearly shown to be the Savior throughout the New Testament. In order for Messiah to be Savior, He must also be Yahweh.

Tell ye, and bring them near; yea, let them take counsel together, who hath declared this from ancient time? who hath told it from that time? have not I Yahweh? and there is no other God besides me; the righteous Yahweh your Savior; there is none other besides me (Isaiah 45:21) .

According to Isaiah 43:10, Yahweh declares that there was no God formed before Him or after him. He also declares that besides Him there is no Savior

Hosea 13:4 Yet I am Yahweh, even thy Yahweh from the land of Egypt, and thou shalt know no god but me: for there is no savior beside me

The Messiah is the image of the invisible God (Col 1:15).